USS Pampanito is a submarine from the Second World War that survived a countless number of battles in the Pacific; it sank six enemy ships and managed to rescue 73 men and take them to the United States.

While it was in service, the Pampanito had a staff of 80 men who shared the tiny space over long voyages.

Visiting its decks is not too interesting but, once you go inside, you will discover a completely different world and feel part of history; the history of those who spent so much time working and living here.

On entering the Pampanito you can visit the rooms where the crew lived; the kitchen, the dining room, a small office and the dormitories are still the same as they were at the time.

Unless you have visited New York’s Intrepid Sea, Air & Space Museum, if you have ever wanted to go into a submarine, this is your opportunity. Exploring the inside of a submarine is not something that you can do in many places. 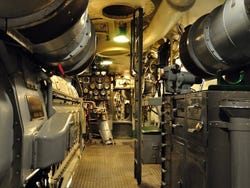